The Joy of Discovery

Maame-Serwah Afriyie is an Elementary School Science Teacher at Success Academy Hudson Yards. She graduated in 2018 from Penn with a degree in Biology. 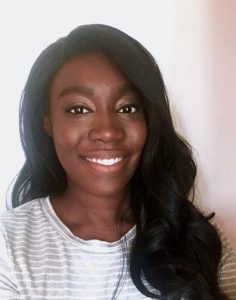 Although it is not a common label for a science teacher, I think of myself as a storyteller. As I prepare lessons for my elementary school scholars at Success Academy Hudson Yards, I consider ways that the material can relate to their everyday experiences and help them make sense of the mysteries around them. Whether it is visually tracking the lifespan of a soundwave on a graph or mapping out the claim, evidence, and reasoning of an exciting new observation, I teach my scholars that science is one of the world’s greatest stories and empower them to become narrators.

At a young age, my interest in cooking spiked questions about agriculture and nutrition, which I would pursue at Penn through work on the Sankofa Community Farm and in a Botany class. My two Botany professors, Dr. Timothy Block and Dr. Cynthia Skema , took our class on frequent field trips to forests to collect and identify plant samples in the field. The opportunity to explore the natural world and learn through making my own observations inspired me to think about the tangible impact of scientific discovery on all aspects of life. The lessons I learned in Botany were informed by my time volunteering at the Sankofa Community Farm where I mentored high school students and taught them about nutrition and food sourcing. These hands-on experiences shaped the way I now think about my scholars’ learning, and I strive to foster their curiosity. I want my classroom to mimic the joy of discovery that I experienced as a Biology student at Penn.

In my classroom, I avoid telling scholars definitions at the beginning of a lesson. Instead, they work through experiments to come up with their own theories about whatever phenomenon we are studying. It is so exciting and rewarding as a teacher to watch a first or second grader argue passionately to support or challenge one of their teammate’s ideas. Just as I did as a Penn undergraduate and as professional scientists do across the world, my scholars push
each other to test and retest their claims, rule out other possibilities, and move the whole class’ thinking forward.

Whether my scholars are in the classroom completing an experiment or scattered across New York City having discussions over video call, I want them to know that solving scientific questions, just like solving any of life’s greatest mysteries, requires teamwork. As we pivoted to remote learning this spring, it was challenging to replicate the collaboration and group dynamic that is achieved in a science classroom. In remote learning, however, I found that some of my
quieter scholars came out of their shells when I called their homes for one-on-one check-ins — they were excited to discuss their observations. Others needed large group discussions to bounce ideas off one another and come to creative solutions. This opportunity to guide scholars through group problem solving and discovery is one of the most rewarding and exciting parts of my job, whether we are in person or remote. The ability of my professors at Penn to relate Biology to everyday experiences inspired me as a student and a teacher. Whether I was identifying a flower I had found on the forest floor or mentoring high schoolers in urban farming, I learned that science touches all of us in big and small ways every day. At Success Academy, I get to help young people marvel in the wonders,
mysteries, and problems that surround them — and push themselves and each other to arrive at solutions.