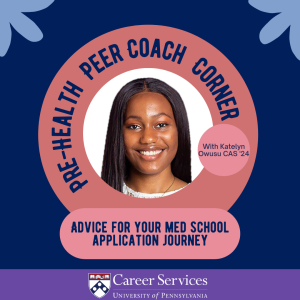 Welcome to the Pre-Health Peer Coach Corner where we will share tips, tricks, and advice for being Pre-Health at Penn.  This four-part series will focus on helping applicants navigate parts of the medical school application process.

In our first post, we will be exploring a source of stress, confusion, and anxiety for many people: Letters of Recommendation.

But fear no more because our panel of alums is here to give you all the insider information on when to ask for letters, how to ask potential recommenders and so much more!

Let’s get into it…

My name is Luis Rosario, and I graduated from the College of Arts and Sciences in 2019 with a Major in Cognitive Neuroscience and a minor in Chemistry. Since graduating, I have been working as a research coordinator at Penn Neurology where I manage research studies investigating ALS and other related neurodegenerative disorders. I enjoy exercising, playing video games, and dancing, a hobby, and passion I discovered as part of Onda Latina at Penn! I’m super excited to start medical school this fall at the University of Chicago Pritzker School of Medicine!

My name is Sara, and I graduated from Penn in 2020 with a Biology degree. I moved to Texas after graduation to pursue immunology research and decided to take two gap years before starting medical school. I will be attending UT Southwestern in August!

Hello! My name is Darrian McAfee. I am a first-year M.D. candidate at the University of Maryland School of Medicine who is set to graduate in 2025. I was a biology major with a concentration in neurobiology at Penn and went straight through to medical school after undergrad in 2021. My motivation for medicine stems from my fascination with the science of the body and my desire to connect with patients on a personal level. Outside of medicine, my hobbies include baseball, bowling, and playing geoguessr. I am always open by email if anyone would like to reach out!

How many weeks did you give your recommenders to write their letters?

Sara: I decided to ask the recommender I was sure about immediately after taking their class – I figured that my performance in the class would be the freshest in their mind directly after the final. In that sense, I had given some of my recommenders unlimited time. For the rest, I asked around January before my application cycle, so I was giving them about four months but typically there was a six-week turnaround time.

Darrian: The HPAB recommends at least a month, so I’m pretty sure I gave about that. I let them know at least four weeks in advance, but a good amount of them asked me to remind them the weekend before the deadline.  Then I would just send follow-up emails at the two-week and one-week marks. Four weeks total.

Luis: I think I gave them maybe four to six weeks. Most of the recommenders are professors and are busy at the end of the semester, so you want to make sure you get on them early. I wanted to make sure that my letters wouldn’t hold up my application, so I made sure to email them at least a month beforehand and picked people that I thought knew me well.

How early did you ask for recommendations?

Sara: The earliest I asked for one was junior year because I wasn’t exactly sure how the recommendation letter system worked freshman and sophomore year. But, I think if somebody is extremely confident that they would be asking a certain professor, they should ask as early as they would like.

Darrian: Although I had a good idea of the people I wanted to ask at least months before, I didn’t reach out then.  I waited until that four-week mark. But I started putting together a list of who I was going to ask, around January or February, making sure they were people I had kept in contact with. You don’t want to cold email someone who you didn’t have a good relationship with prior.

What information did you give to your letter writers?

Sara: It depended on whether they were academic or non-academic. For my professors, oftentimes I would always offer to send a full transcript, my draft personal statement as well as an expanded version of my resume, which had brief descriptions of my activities. For my non-academic recommenders, I would send my transcript or resume to give them a picture of my academics (since they didn’t have access to it). I also sent a document detailing my activities and a paragraph about why I want to go into medicine so that they could reference that in their letter.

Darrian: Officially, the only thing I gave them was my CV. But I also reminded them which class it was that they taught me in, and I let them know that I was available to answer any questions they may have. One of my recommenders actually met with me to ask me some questions… “Why Medical School?” “What are you looking to do in the future?” “What are your goals in life?”

Luis: I think it varied from writer to writer. Some of them, like my boss, for example, whom I talked with all the time didn’t really want much, and neither did the neurologist that I worked with a lot. But, even though they didn’t ask for anything, with every single person I made sure to send a draft of my personal statement and my expanded resume.

How did you decide which letters to include in your HPAB packet?

Darrian:  I asked six people; my idea was to include any of them that got back to me. The people that I selected for it, were people who I felt had known me for a while, and I was either still in touch with them, or at least we were very close during class.

Luis:  In my case, I was lucky I had a good variety of people to ask: people that have worked with me, people from my undergraduate fellowship, and a couple of professors from both humanities and sciences. I think that a good point is to try to make your letters as well-rounded as you can. I know they say to get at least two science professors, but more than that try to find people with whom you have close relationships because they will be able to showcase the person you are really well.

Any advice for asking your boss for a recommendation?

Luis: Be clear and have open communication with them. My boss already knew that I would eventually move on to go to Medical School. So then when it came, I just went up to him and said “Hey, I have a favor to ask. I really appreciate working with you and I think this has been a good working relationship…” I think it’s important to frame it in that way, instead of just asking for a favor. Make sure to tell them how much you appreciate them taking the time out to help you out by writing this letter, and of course, let them know ahead of time.

As an alum, what was your experience asking professors for LORs? Do you have any tips for people who might be in the same position?

Luis: I was nervous, I think a lot of people are nervous because some of these professors have hundreds of students every semester so you’re probably at least a couple hundred students away from recent memory. But I think the Pre-Health Advisors had it right: don’t be scared to send that email. Everyone I asked said yes, no matter what. I had a professor when I was a junior so it had been three years since I last had her class but she was more than excited to write a letter, she just asked me to send her my materials so she could refresh [her memory of me]. Another thing that I think helped out a lot was making sure to find and send my final assignment in those classes, to my professors so they could remember also what my work was in their class.

What tip would you offer to applicants participating in the 2022 cycle?

Sara:  Don’t be afraid to ask anyone for a recommendation letter, even if you didn’t earn the grade that you were hoping for. If you showed a lot of effort, built a good relationship with the professor, and you think that they can say good things about your character, or how you interact with other students that’s just as valuable of a letter as an A+ or an A letter.

Darrian:  Don’t focus on the number of letters that you have and instead focus on what’s inside the letters. Even if you have three or four letters, make sure it’s people that know you, your goals, and your background, and can really give a good representation of you. It’s definitely quality over quantity. I also want to add that when emailing, phrase it in a way that gives the recommender an option of an out. You want to make sure you’re picking the right people and that they can speak highly of you rather than just writing a generic letter.

Luis:  I think they’ve probably heard this already but submit early, Penn has all the deadlines for a reason, I don’t think I would have been anywhere near successful had I waited, so I think it’s true that they say the earlier you submit the better. My second piece of advice is to relax and know that things are going to move at their own pace. I think schools are being honest when they say they’re doing a thorough review of your application and that can take a while. So don’t worry if you don’t hear back immediately, if it’s the right fit, they’ll definitely reach out to you.